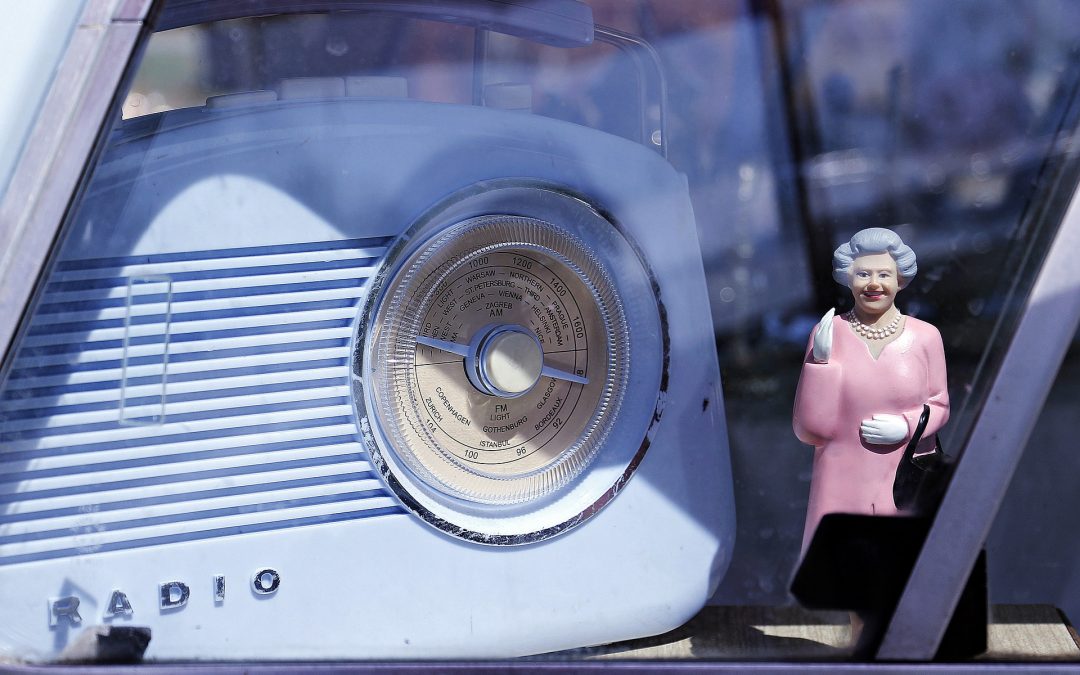 Queen Elizabeth II was born with a Taurus Sun, Moon in Leo and Mercury in Aries on 21 April 1926, transitioning 8 September 2022 under the Pisces Full Moon Rising. Discover the amazing Astrology Numerology portrait of Queen Elizabeth II who was born to rule the United Kingdom.

“Perhaps there is a pattern set up in the heavens for one who desires to see it,  and having seen it, to find one in himself.” Plato ~ Philosopher

I’m first going to share some deep insights into Queen Elizabeth through her numerology blueprint on why she was so very private yet captured hearts worldwide. Creating a powerful monarchy and building an empire, Queen Elizabeth holds an extraordinary chart.

Our numerology blueprint shares 7 main numbers that make us up. Our soul, personality and expression energy come from our name vibration and destiny from original birth certificate name.

Numerology and astrology are ancient sciences, revealing who we came here to be which is encoded at birth and forms our energetic template, recorded in the Akashic.

This is the numerology blueprint for Queen Elizabeth II:

Queen Elizabeth was a 7 lifeforce lifepath energy, this is derived from her birth date 21 April 1926. She also holds a 7 attitude vibration. The 7 is the most private of all the numbers and intuitive.

The 7 in numerology is philosophical and likes to be alone at times. With Queen Elizabeth holding two 7’s, this charged her intellectual capacity, preferring to talk about subjects that were of interest to her.

7’s tend to have an air of mystery and secrecy around, with only those closest knowing what’s going on inside. They will do anything to keep the mystery going. They seem like old souls but are like children for life in many ways. Queen Elizabeth may have seemed cold or aloof but was probably just observing the world.

7 life-force energies LOVE to travel. Fun fact – Queen Elizabeth was the most travelled monarch in history. The late Anthony Bourdain (Celebrity Chef) also embodied a few 7’s in his numerology – another renowned explorer of the world.

Queen Elizabeth II holds the record for the most countries visited by an individual monarch. She visited more than 120 countries on six continents.

7 Facts about Queen Elizabeth II you might not know: 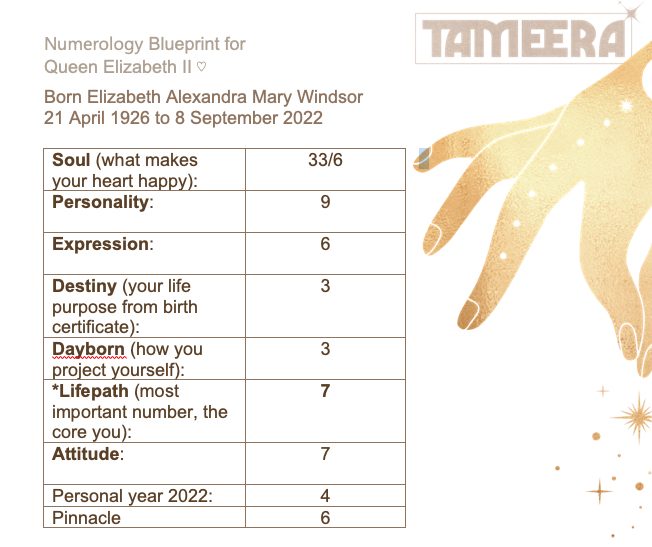 I’d say with the Meghan Harry Oprah interview Queen Elizabeth would have been mortified. Incase you were wondering I wrote about Meghan and Harry a few years ago revealing if they are truly soulmates through their astrology and numerology, predicting their baby and royal departure.

If you hurt a 7 life-force energy they will cut you from their life, you will feel their energetic door closed with words that can cut like a dagger.

As Pythagoras said “those who desire wisdom should look for it in solitude.”

Queen Elizabeth was a 3 day-born energy – this was her face to the world revealing two very distinct sides. One that was open and another that was incredibly secluded. Working in entertainment was a natural, making a great speaker and enjoying an audience on her terms.

Queen Elizabeth was well known for her gift of communication and intellect, even being seen as humorous with something interesting to say.

The Queen held a 33/6 master soul vibration and a 6 expression. The 6 is the matriarch. Her soul was happy when she could share her views with the world, to be the ‘grand-mother’ commanding respect from the world. Family, service and respect was everything to the Queen.

The 6 is pregnant with love – it’s the most loving of all numbers. As Queen Elizabeth held a couple of 6’s in her numerology the energy was magnified.

“The 6 is happy when family, friends and loved one’s respect and admire your efforts. The 6 likes to nurture so having a child or pet is very important otherwise you may find yourself in relationships where you are looking after someone. Attractive clothes and taking pride in appearance is of utmost importance. Responsibility and integrity are the great message of the 6 with one of the lessons knowing when to ask for help.”

Barack and Michelle Obama shared on Instagram they are grateful to have witnessed her majesty’s dedicated leadership, and are awed by her tireless dignified public service.   Queen Elizabeth held a 9 personality which simply means how can I reach the world with all that I do? Money often comes from unexpected sources so long as it’s not pursed for material gain – there is often philanthropy involved with the 9 personality vibration. At interesting dichotomy as monarch and head of the royal family.

The numerology destiny of Elizabeth Alexandra Mary Windsor vibrates to a powerful 3 vibration. Destiny energy comes from your original birth certificate name. I truly believe Queen Elizabeth held the destiny as a powerful woman and communicator.   Before the Queen was to leave the planet, her destiny was to motivate and uplift other people. She held the destiny as a communicator, writer and motivational speaker, truly embodying this. The Queen wore her lofty titles with a light touch to act in a comic sketch for the London Olympics as she was to record steadying messages for the London Olympics to the people of the United Kingdom during the Covid-19 lockdowns.

Queen Elizabeth held a special number combination of a 3-6-9 in her numerology representing creativity. FACT: Elizabeth’s admiration for the arts, along with England’s economic buoyancy during her reign, provided ripe conditions for the production of enduring hallmarks in the visual, decorative, and performing arts.

The Queen departed this earthy plane in a 4 personal year and 6 pinnacle vibration. Being of service, creating a lasting legacy and embodying her love of family and tradition.

Giving a few insights into Queen Elizabeth’s astrology when she passed, I looked into her major lifetime astrology transits and could see Saturn was conjunct Mars in her chart. This started March 2022 and finishing in December 2022.

This can bring through delays and frustrations with energy being used from the reserves to push forward. A precaution would be to not overdo it. We are soul beings having an earthy experience and no doubt this was the time she chose to transition.

Queen Elizabeth’s natal moon of Leo was also in opposition to the Aquarius moon on September 8, 2022 (like a push pull effect magnifying forces just like the actual full moon has on us on a global level). She was also born with Chiron in Aries in the 3rd house of Gemini – Chiron is currently in her third house in Aries. March 2026 was the actual conjunction. ‘Chiron the key to healing returns’ occur around the age of 50 and again 50 years later.

Did you know astrologers would be present when a baby was born a few hundred years ago for the worlds elite? It’s written in the numbers and the stars.

The Queens Sun in Taurus
The Queen’s Sun is in the zodiac sign of Taurus indicating she’s a reliable and solid individual, with a strong need for stability, routine and security. She approaches life in a methodical manner preferring the tried and true pathways of familiar territory. Much of her energy was spent on making the world secure. For this reason she was appreciated for her reliability and ability to provide a safe haven for others. Tradition appeals to the Queen, and therefore seen as a stalwart in society, taking on the more conventional roles. Her down-to-earth nature also means she literally enjoy the fruits of the earth.

The Queens Moon in Leo
With the Moon in the sign of Leo the Queen loved to be the centre of attention. This can represent play, and knowing all the tricks of the trade when it comes to getting others to join her. This can make delightful company. When life gets tough I can see the Queen liked to play in order to lighten up the situation. Parties, festivals, picnics and other fun events were the food of life.

The Queens Mercury in Aries
Representing a single-minded individual, tending to make up her own mind rather than relying on the ideas of others. Can intensify the energy to speak her mind quite forcefully. Mostly this is a benefit of making sharp decisions on the spot.

The Queens Venus in Pisces
I can see the Queen yearned to merge and be at-one with her partner and the universe. There is a deep connection to inspirational activities ranging from listening to beautiful music to visiting art galleries.

The Queens Mars in Aquarius
The Queen often tackled life’s challenges in unusual and inventive ways, possessing the ability to view projects in an objective manner. This is fortunate because she enjoyed working with groups of people, particularly groups of like-minded individuals. She was here to fight for just causes. Unpredictable, and a natural group leader. 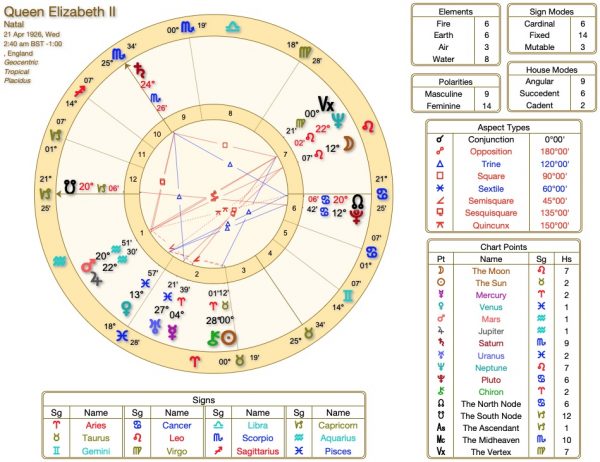 “I cannot lead you into battle. I do not give you laws or administer justice. But I can do something else.I can give you my heart and my devotion to these old islands and to all the peoples of our brotherhood of nations.” Queen Elizabeth II

I’m featured in VOGUE and teach through workshops and retreats in addition to private 1:1 consultations worldwide. I’ve mastered the perfect formula to read anyone and I’m passionate about helping you transform your life, career and relationships.

Book in your 1:1 Intuitive Guidance Life Direction consultation here. It’s about your time..